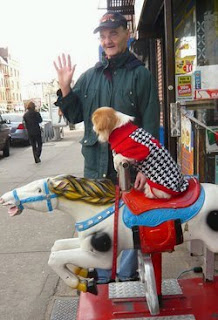 The recent publicity regarding Bay Ridge's crazy old superindendent Richard Martin brought me to an amazing revelation this morning. For those of you reading this post from out of state, Richard Martin made the new in February when tenants in his building complained about harassing notes Martin admittedly left in the lobby, chastising tenants for their behavior. Martin claimed they left garbage all over the lobby, and he declared war. Aside from the series of notes, he told the NY Daily News he moved all the garbage pails to the fifth floor, to punish the unruly tenants by forcing them to hike five flights just to deposit their trash in a bin.

An example of one note:

"You tenants better stop being so stupid and retarded"

... "the [expletive] who ripped my Christmas decoration down from ceiling and put in front of my door.

"If I catch you I will kill you where you are. You don't want to [mess] with the Irish," he added.

What came together for me today was this:

On the morning of February 9th, I woke early to make it to work because I took the over-time opportunity to drive a group of high school students to a drill meet in Queens. I sat on the R train at about 6 a.m. that morning. Sitting directly across from me on the train with hardly another soul in sight on that too-early Saturday morning, was this older guy who stood out to me because he kept shifting around in his seat and kind of chewing his gums as if he had a pair of loose dentures or something like that. I also noticed he was wearing a Korean War vets hat as he sat and read his copy of the morning paper (the Post, I believe) and drinking from a small paper cup of coffee.

Putting his sort of lanky appearance aside, I thought about the other vets I've seen wearing those trucker-style vet hats. They're the living remnants of wars' past, my tired mind postulated. How come I've never seen any younger vets wearing vet-hats? But I couldn't help but to wonder what they hell this guy was doing riding the R train a 6 a.m.

When we got to 59th Street, I stood to transfer to the N express, and so did this guy. On the platform, about 20 feet down, an early morning MTA employee quietly swept debris into a bucket. Within moments of stepping on the platform, the old guy does something that almost made me laugh right out loud. My sleepy reverie on vets and wars and vet hats came to an abrupt end when I see the guy bypass the platform trash can and instead throw his coffee cup and empty paper bag right onto the tracks- RIGHT IN FRONT OF THE MTA GUY SWEEPING UP THE GARBAGE! Seriously, in plain sight.

I thought, what a slob! So funny. So, so funny. It was just a funny New York subway story, I thought.

Until today. I finally see this funny photo of Martin with his dog on a street-side amusement ride posted on a local blog, and I realize that the old guy that morning, the garbage-thrower-right-in-front-of-the-MTA-worker, was Richard Martin! The very same man that's demonstrated such an objection to the supposed poor hallway hygiene in his own building. I guess Mr. Martin thinks it's OK for him to litter and to be a blatant slob, but not for someone else to be, especially when Martin has to clean it up as the super. Seriously, he threw all his trash onto the tracks RIGHT IN FRONT OF THE MTA GUY.