Welcome to the Spring 2010 Season

I got out on the beach for a sneak-preview on Rockaway Beach two weeks ago, but this weekend marked the unofficial opening of the 2010 fishing season. 70-degree days (chillier on the peninsula), fresh bait from the Citgo again finally, some new gear - more to come - and, of course, licenses.

OK, so the deal with the licenses, er, permits. $10 bucks. Lasts for 1 year. After some confusion that was never really clarified by the DEC, it turns out that the permits issued last fall actually are good for a full year from their issue date. You didn't need to buy a new one on January 1st of this year (who on earth was fishing Jan. 1 anyway...what with the cold and the hangover). I discovered this recently while on the DEC website, and lo and behold, my green permit card I've had in my wallet since November had said it all along: "Valid 10/01/2009 - 09/30/2010."

The website, when I put in my existing license number, showed my status clear as day, as the holder of a valid permit.

Who knows. Anyway, more importantly. After 4 hours of beach fishing yesterday with chief angling cohort George and his brother, and putting in an hour or more today of bay wall fishing with my own brother, it's clear at least right now, it's too early for fish.

Either way, it was fun. Beautiful weather, warm sun, beverage or two. The beach was full of dogs and their mostly careless owners who let them roam all over. One licked me while I was taking a rest, another came right up to one pole (we had five out at once), lifted its leg and peed. In the end, it missed by three inches. 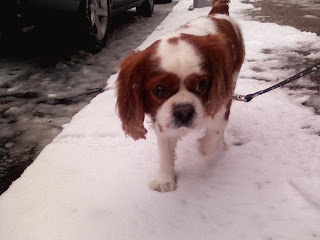 I've already accidentally hooked my parents' dog once. I don't want to repeat that with a stranger, and I don't think you want a dog chillin' in your living room smelling like...bunker oil. So, come on. It wasn't a big deal, really. Tons of people out walking, bringing the pooch out, no leashes, trying to be care-free, shaking off the winter.

A bunch of people stopped by, telling fishing stories, asking the inevitable "what do you catch around here?"

They're always so curious, and it's fun for the most part surprising them when they learn you can hook close to a dozen different types of fish with your feet on the sand, right here in New York City.

I even saw my neighbor, Duke, who reports that people down in the Beach 40s have been getting fish in the upper parts of the Bay. That made sense, because I recently read somewhere that shallower bodies of water are the first to come back to life with fish after the winter - the water temps change first there, and, if you're lucky you can actually find some fish. However, I subscribe to Duke's logic when it comes to fishing down there. He's a big-time angler, too, but it's not worth getting all the way down there, and the neighborhood is still tough enough that I'd be worried about leaving my parked car. Or bicycle, these days.

Anyway, this winter I did a bunch of fish-related reading, including "Walden" by Thoreau, and several Hemingway short stories on fishing, put together beautifully in a nice little book lent to me from yet another fishing friend. Oh, also an interesting John McPhee story in The New Yorker about pickerel fishing.

Info on the new equipment added to the mix coming soon, too.

In the meanwhile, just to squeeze in one more tidbit of fishing news: Kittatinny Lake was stocked with 800 walleyes last fall. Should be some great game hunting in the distant future - supposedely they won't be of legal size to keep until, I think, next summer. 2011.
Posted by Mike at 9:03 PM No comments: