the tale of the 40-incher 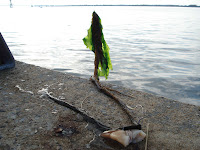 All I caught this past weekend fishing in Jamaica Bay was a seaweed mess. Seriously, it's getting pretty bad. Not even a crab, not even a searobin! Nothing. Alive. At. All.

I had a good feeling about it, too. The bay wall was lined with anglers up and down. The tide seemed high, which I interpret to be a good sign. There wasn't too much wind. All the pieces were there, but didn't come together. I did, however, have just one sign of hope: the first bite of the season. The tip of just one pole did two simple shakes, but to no avail.

Better luck next week. I did manage to take a few pictures to illustrate our most miraculous catch. The 40-incher in '06 was close to being the 40-incher that almost was. Let me explain.

It was getting late into the evening, and we'd been out fishing for a few hours on a warm night in early June. We managed to down about two bottles of wine and had already reached the point where....we weren't fishing while drinking, but....were drinking while fishing. It's the point when it no longer matters if you catch anything. But, like the moment when you're rebaiting one pole and turn your back for just a second or two, somehow the fish know to strike when you're at your weakest.

In the streetlight, drinking red wine out of red plastic Solo cups, one pole took a dive and kept dancing. I grabbed it, made sure there was enough drag in case it ran, and gave a quick pull to set the hook. The fish felt as if it were running half the bay. Line kept flying off the reel, which buzzed with yard after yard. All this would have to be pulled back in, and with any luck we'd land the fish, but crazier things have happened than losing what would have been a great catch.

Over the next five minutes, I walked a stretch of wall about 150 feet in length, going where the fish went, fishing partner, at times, assisting my continuing wine drinking by holding the cup to mouth. It became very clear this was a big fish on the line. 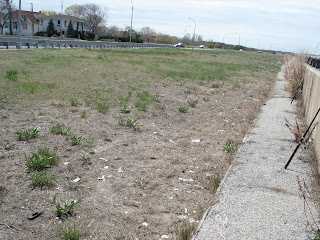 When it finally seemed that almost all of my line was in, and I had sufficiently tired the fish out, George pulled himself up onto the 4 1/2 foot wall and looked over. "It's huge." I held tight to the pole, and we switched spots so I could see, too. I lifted myself up onto the wall and saw the white belly of a long, straight fish pointed head-first to the wall, like a foam buoy. Its gills still moved, and in that moment the wine buzz took the back seat to our only prerogative: getting it out of the water as quick as possible before something could go wrong. 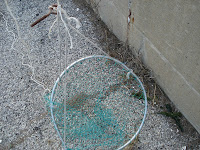 Because of the 10-15 foot drop from the wall to the surface of the water, we'd rigged a large net that dangled from a length of string. It's the only way to get heavy fish up. One person holds the pole, while the other hops up onto the wall and tries to scoop up the fish into the hanging net. We'd done it before, but this time the fish was too big. When we managed to get it into the net head first, it's weighty back and tail would cause it to slip out at the slightest pull. Same when it went in tail first.

We tried this for five or ten minutes. If it came down to it, I vowed I'd walk down to the bridge, climb over the railing and down onto the boulders and pull the fish up myself.

Just then, another fisherman wheeling a shopping basket full of gear and poles strolled by on the 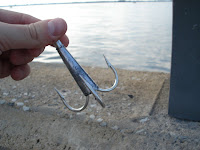 sidewalk about twenty feet behind us. He asked if we had caught anything, and when we told him about our problem, he pitched in without hesitation, pulling up a short stepladder and suggesting we try "gaffing" it. I'd never heard of such a thing, but in a second he pulled out a plastic bottle with string wrapped around it. At the end of the string was a large hook. I mean, bigger than something you'd fish with, but not as big as you'd think it would be to pull up a massive fish. He lowered the gaff, and I stood back, George perching atop the wall, watching. All I could think of was that this unknown guy was going to hook this fish the wrong way, the hook would slip, the line would break and we'd have just been a part of the biggest fishing debacle I'd ever heard of.

Before anymore fear, however, the fish came over the wall and dropped down onto the jagged concrete. In another instant, the guy was gone, off to his own fishing spot, laughing himself down the sidewalk, hoping for a similar catch.

We laughed, as well. It would have been entirely impossible to lift the fish out had the stranger not walked along. The fish measured an even 40 inches, and according to the rusty scale in our tackle box, it weighed 19 pounds.

There were scales in my parent's backyard for weeks. 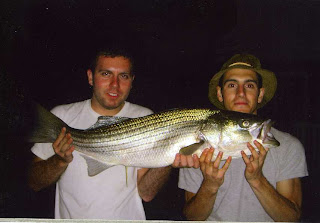