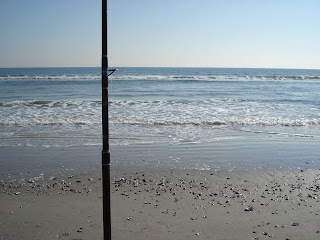 April 15th marked the start of the 2008 striped bass fishing season in New York, and for the past six years, I've frequently fished Jamaica Bay, the estuary located between Brooklyn and the Rockaway Peninsula, where I grew up.
By some accounts, stripers are doing better today than they were in previous decades. After extensive overfishing in the New York and the New England area in the 1980s, strict laws were enacted, making it illegal to keep any striped bass below a length of 36 inches from head to tail. In fact, it's said that in some areas of the Massachusettes coast, bass haven't been caught in 50 years. In 1990, the Atlantic States Marine Fisheries Commission eased the regulations, in reaction to successful improvements in the striped bass populations along the coast. Today, each angler per day is permitted to keep one striped bass no smaller than 28 inches, and a second bass no smaller than 40 inches.
In six years of fishing with friends, we've caught what I'd estimate to be about 15 fish that were over 28 inches, the largest of which measured 40 inches (2oo6), 36 inches (2003) and 35 inches (2007). In six years, we've only been checked by park police once (2007) to make sure we were not in violation of the law.
Out of all the fish we've hooked in the waters off of New York - searobins, blue fish, fluke, weakfish, skate, sand sharks, sea bass, porgy - striped bass are, by far, the most prized. While they don't have the sharp teeth that blue fish are known for, bass are strong swimmers and good fighters when hooked. Oftentimes, they'll hit a baited hook and run with it, pulling out long lengths of line before they are slowly tired into submission and brought in. Their meat turns tender and white when cooked, and not oily or full of bones like other types of fish. The average 28-inch fish weighs about 10-12 pounds, and a larger bass of about 35 inches usually weighs around 20 pounds and could easily feed around a dozen people. 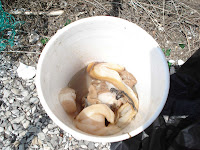 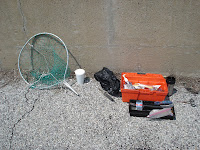 The real allure to bass fishing in New York is the simplicity of it all. You cast a baited line out and wait for something to happen. No licences or permits are required to surfcast or fish in the bay. All one needs is a single rod ($30), a net ($12), hooks ($3), some light gear ($7), and a cup of bait ($3). All of this, including the fresh bait (clams) could be purchased at any of several gas stations in Rockaway.
On Saturday, the day was overcast at first, and we headed out about 11 a.m. to our usual fishing spot, near Riis Park. This past winter was the first time I've given any serious attempt to getting out and fishing in the off-season, just to see what I might catch. As a Christmas gift, I picked up a pair of chest waders and gave it two or three attempts from January to March before understanding why the bait shop didn't even bother to stock fresh bait until the weather was a little warmer - not even a bite.
Bass fishing has been something we picked up entirely by chance. I'd always seen anglers lining the bay wall in Rockaway, and before the September 11th attacks, dropping their lines off of the nearby Marine Parkway Bridge, where I later learned fish frequented because of the change in water currents near the bridge pillars. I think it was curiousity or boredom that first put a fishing pole in my hand out in Rockaway, but it quickly became an addiction, first because of how impossible it was to catch anything initially, then after realizing that there were, indeed, big fish to be caught in our local waters. 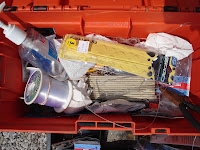 Our tackle box today has grown considerably, today comprising of, among other items, a scale, a bait knife, a folding ruler, a flashlight, and several other items that have either been necessary at one point or picked up for one reason or another - a bottle opener, a few paper towels, a bottle of hand sanitizer, etc.
Bay fishing is the simplest fishing to do, but it's not anything glamorous, and I don't often take guests down to the bay to fish because, while the fish are bigger in the bay, they're less likely to be on your line. Our bay fishing sessions are often waiting games spent leaning against the wall, checking the views of the busy waterway immediately in front of us, JFK airport about five miles to the east, and the Manhattan skyline 11 miles straight ahead. 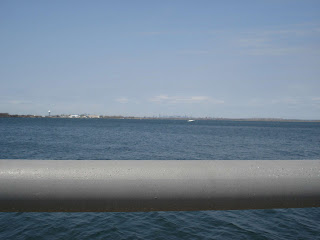 If you're curious, the World Trade Center stood high above the left part of the Manhattan skyline in the picture above, about twice as high as the rest of the downtown building line seen just behind and to the right of the Doppler radar tower toward the left side of this photo.
The biggest problem - just about the only problem - with fishing on the bay is the high number 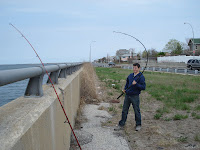 of snags on the bottom. The bay isn't very deep, and there are several wrecks throughout. On an average day of fishing we'll lose five or 10 rigs on snags alone. While we've taken to bringing down multiple poles, usually two per angler, unhooking the snags or re-rigging the hooks helps stave off the boredom in between catches. When there are no fish, it can't hurt to check the lines and make sure they aren't caught on the bottom on...whatever it is they always get caught on. It's a mystery to me.
However, as simple as the concept of fishing might be, it gets complicated when factoring in any number of variables like tides, hook type, bait type, or even cloud cover, knot usage, underwater terrain. I think I could forever be a student of the bay and not figure it all out, but in a few years we've at least picked up a working knowledge.
Saturday's most frequent catch, however - conglomerates. I missed the first two catches, which were a single mussel and a small mud crab. However, I did document the rest of the day, once we had realized the chances of getting an actual, living fish - at least at this too-early point in the season - were slim to none.
Catch 3: a small, crab of some type. 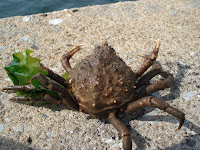 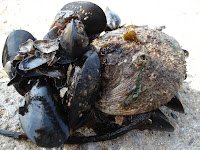 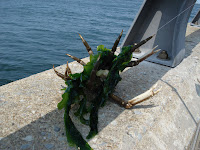 Catch 6: a first here - a crab connected to a nasty conglomerate. 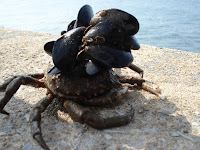 That's about it.
We left concluding that this was one of those days where you have to pay your dues, so-to-speak. If we had given up after our first summer of catching no bass at all, we'd have gotten nowhere.
Until the next fishing day - at the very latest this coming Sunday or next. Gotta love the spring.
Posted by Mike at 10:31 PM