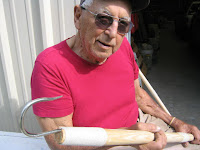 Now, I had never heard of Frank Mundus, or Donnie Braddick, for that matter, before earlier this year. But go figure. In the past three weeks, I ended up hearing some of their great tale - landing a world-record setting 3,427-pound Great White off of Montauk, in the summer of 1986 - directly from a relative of Braddick. And, now Mundus is dead.

I'm told Mundus was a character. An article I read about him just a few months before his death painted a picture of his salty charismatic ways. This was a guy who, for decades, claimed he was the main inspiration for the 'Quint' character in the film Jaws, while writer Peter Benchley had always denied it. Mundus published books, he sold t-shirts, and, despite his passionate protest against Benchley's denials, Mundus constantly marketed himself as the original Jaws-man out of Montauk. $2,000 was the cost for a day-long 5-person fishing charter with him aboard the Cricket II.

What is confirmed is that Mundus did take Benchley out on several fishing trips while Benchley was researching his book. According to reports, Benchley was impressed by Mundus' seemingly unusual technique of harpooning sharks and attaching them to ropes that dragged large air-filled barrels that, even if pulled underwater, would inevitably float back to the surface when the shark would tire out. This technique is perfectly suited for the silver screen, and, naturally, it was portrayed in Jaws.

Mundus had caught a 4,500 Great White by harpoon in 1964 off of Montauk. The 1986 record-setter was caught by rod and reel. Mundus was the captain, and his boat had come upon a whale that had recently died. It was just after midnight in calm seas, and two large sharks came upon the carcass and began feeding, taking huge chunks of flesh off of the whale. Mundus decided to wait until daylight to even attempt hooking any of the sharks, which he said ranged from about a thousand pounds up to the largest one, which looked at least three times that size.

Before dawn, hooks, lines and wires were rigged up, and when the largest shark was going in for another bite, they slipped a hook in front of it, and the bait was taken. The rod was placed in a holder right away, and, in at least one of Mundus' recollections of that morning, "Donnie [Braddick's] in the chair." It was a battle that would last for an hour and forty-five minutes, supposedly with Mundus calling all the shots, and Braddick doing all the muscle work.

The shark that day measured 16-and-a-half feet, and weighed 3,427 pounds. It was, and still is, the largest fish ever caught on rod and reel.

So why does Mundus get all the limelight, while no one's ever heard of Braddick? Well, Jaws came out in 1975, for one. In the end, really, the only difference between the two was that Mundus would go on to market the heck out of himself; Braddick would not. On virtually every part of Mundus' personal webpage are links to purchase something or other. It's a constant sales pitch that's, at times, blatantly opportunistic.

Braddick, I'm told, went on to have a falling-out with Mundus, but has spent considerable time in the shadow of Mundus, who, while acknowledging Braddick as the angler of the world-record setter, stole the scene. After all, you have to be able to back up charging $2,000 for a day of fishing somehow, right?

Supposedly, Mundus put Montauk on the map. Carl Darenburg, owner of the Montauk Marina, told Newsday that no one fished specifically for sharks off of Montauk before he did. Of late, Mundus spent his time alternating between a home in Hawaii and a residence back out in Montauk. But I'm told that in recent years, he had become a notorious presence up in Montauk. Supposedly, had been blacklisted from the Marina after repeatedly being caught selling his own hooks and merchandise to anglers within the confines of the private marina. Mundus, I'm told, rest his soul, was jaded, bitter and cynical.

However you look at it - a Mundus fan or not - it's clear that the fishing world lost a true character last week. I'd like to think there is a little catharsis in all of this. The New York Times, in its obituary of Mundus, finally seemed to take the liberty to call Mundus what he'd been insisting all along: "Frank Mundus, 82, Dies; Inspired ‘Jaws'."
Posted by Mike at 10:12 AM