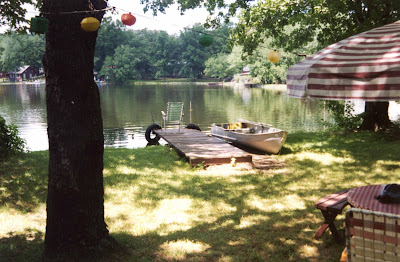 We used to fish constantly at the lake, and we used to also constantly watch my grandpa fishing, too.
He’d stand beside the dock, casting in a spot under a tree where the rest of us wouldn’t bother. We’d lost so many hooks and bobbers up in that tree, but he’d stand out there in a dirty shirt with his spinner reel and throw the line out at all hours of the day, and when there was a bite, he’d yank the rod with a quick flick of his arm that said that the fish didn’t mean anything to him. They were rarely anything other than small sunnies that we caught off the back, and I don’t have any memory of him catching anything large back there, but grandpa still quietly fished off to his side, while the other kids and I fished the dock or the other small stretch of water to its left, but never too close to the other trees.
One summer grandpa unveiled a fishing cage he’d constructed himself. No one saw where it had come from, and no one could imagine when he’d spent the time to make it, but the cage was meant to keep fish alive in the water in captivity until it was time. It was made of several pieces of light-weight metal grating, and, tied with a string to the side of the dock, it splashed down into the water and remained there until someone opened the lid to throw another unlucky, small sunny in. The funny thing is that, under all normal circumstances, we’d always throw the sunnies back, no matter how big they were. But, when the cage was in the water, they came out on our hooks and were captured forever; we kept them no matter how small they were.
You could never really see clearly whether there were fish in the cage, or how big the captured fish were. Their dark skin blended in perfectly with the murky rocks on the lake’s bottom, and through the green-brown water, most of the time the fish just looked like moving brown objects below. But when it was killing time, grandpa would lift the cage, the water would drain into the lake and all over the lawn, and the eyes of every kid in the yard were peeled. Fish would flip and flap in the empty cage, and grandpa would throw the latch, releasing them all out onto the lawn.
He’d take a few fish at a time in his hands, never seeming to care about the spines or fins at all, and walk over to the firewood pile, beside the shed, where he’d already set up a worn plank atop the wood bundles. The other sunnies near the cage would bounce all over the grass, and if one or two somehow bounced its way back into the lake, it didn’t matter much. By the shed, one fish would go on the floor, still flipping, while the other was laid on its side on the plank. The setup was simple, and so were the tools: a pair of red-handled shears and a small, serrated kitchen knife, the exact same kind we ate with each evening, but from his shed drawer instead of inside.
My brother and I had seen this spectacle many times before. Grandpa would frequently take fish back to the Chinese living on his block his store was on, in Little Italy. But, our friends at the lake never got tired of watching. And, I admit, I never got tired of watching either.
We would end up being all boys up there in the backyard at killing time, and grandpa was merciless. First, he’d take the shears and snip the fins, spines and tail off, leaving the fish useless. Sometimes it would squirm and flip in his hands, slipping off the board and onto the sticks below, but it didn’t matter much. Then, he’d take the knife and scrape the scales off of both sides of the fish. Usually, at this point, it would be bleeding from somewhere, bright red blood onto grandpa’s hands, the knife, the plank. Then, he’d take the knife and saw into the fishes underside, from its breast to the tail. He’d put the knife down and reach into the cavity with his bare hands and rip out the guts with his fingers. There’d always be a few strings of something or other that wouldn’t come out easily, and he’d pinch it between his finger and snap it out.
Our friends would stare at grandpa with strained jaws, occasionally getting in the way. The best part, however, occurred only on occasion. The cleaned, gutted fish would be piled on one side of the board, and once in a while one would still flip on the board, devoid of any fins and insides, otherwise completely dead. That was the best part, and it always elicited our shouts and laughs.
When killing time was over, grandpa would throw all the cleaned fish into a pale of lake water, and they’d float there on their sides, fish no more. His hands would be covered in now-dark, dried fish blood and scales, and he’d fake smearing it on one of us on his walk inside. The fish would be wrapped in butcher paper and put in the back of the freezer, and that was all we ever saw of them.
Posted by Mike at 10:44 PM