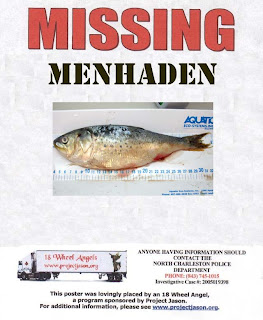 The owner XTL Transportation, in Linden, New Jersey-based trucking company reported that more than 63,000 pounds of Menhaden baitfish (a.k.a. bunker) were stolen early Wednesday morning along with the refrigerated trailer the fish had been stored in.
In an article published in the The Star Ledger, the owner of the trucking company stated that two other storage containers that held furniture and other items were also cut, but the items were not stolen. Only the baitfish were.
He admitted that he suspected an inside job, and police are investigating. Supposedly, the fish are valued at about $130,000, which seems about right if your gold standard is the Citgo baitshop in Rockaway.
I can just see Tony Soprano now, sitting on a pile of bunker near the Jersey shore.
Posted by Mike at 2:00 PM