permits are here; what a mess 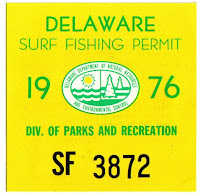 Starting October 1st, unless the date gets pushed back, fishermen surfcasting - and bay casting, for that matter - will be required to carry fishing licenses under new regulations from the New York State Department of Environmental Conservation.

The system is wildly complicated. After multiple visits to the DEC's website (you know you have it bookmarked at work..) and an email to their public affairs department, I was assured that permits will be needed for my simple strip of beach and others beginning October 1st. The charge is $19 for the year, which is reasonable. What I'm not happy about (and I'm sure others will object to, as well) is that licenses issued for October 1st will only be valid through December 31, 2009. They run on calendar years only, not 12-month periods. So, this year I'm paying $19 to legally fish for three months (cold ones, too) and on January 1st if I plan on getting a nice New Years morning hungover fish session in, I'll need to shell out more cash. Literally. It's $29 for next year, supposedly.

The right thing to do here - don't start the permits until January 1st. Money is tight. Fishermen aren't rich. There's no need for this right now, at October 1st. Why put a bad taste in the mouth of fishermen right off the bat like this? Starting them in October and asking people to pay the full year's fee for only three months is just unfair.

Permits aren't a bad thing, but the DEC had better be prepared for much backlash. Not only is the website that attempts to provide info on the licenses WILDLY complicated (do I need a fishing license or a marine fishing license?) but the D.E.C.A.L.S. website that allows you to purchase your permit is also absurd. I had just about sent a second email to the DEC when I realized that I did not need to already have had some kind of experienced hunter/trapper certificate in order to get a fishing license. I don't have a problem with buying a permit. Serious fly fishermen have gladly purchased permits for a longtime, but they see the immediate results of their money each year or several times a year when their streams are stocked.

According to the DEC website, revenue brought in from permit sales will go into the "Marine Account," part of the Conservation Fund which benefits the care, management, protection and enlargement of fish and shellfish. Other monies from lifetime permits (on sale for between $150-$400, depending on the permit) go into a Fish and Game trust account.

Officials on Long Island are already opposed to the permits, and they say that this whole issue was brought up in a sneaky way, too. The permit decision was a proposal adopted by the state budget, not a separate piece of legislation. New York State Assemblyman Fred W. Thiele, Jr is opposing this. The permits are strictly revenue-raising devices, Theile says, and the Conservation Fund "will not specifically benefit any marine fisheries programs or the region of the state most affected by the legislation." Theile goes on to predict that the revnue would "do nothing but cover existing costs in the state’s Department of Environmental Conservation, rather than be used to better the state’s marine and coastal districts."

My opinion? So what if I have to pay a fee each year to fish? I'm the one that enjoys the privilege of fishing, maybe I should be the one that pays for that privilege. Permits will separate the men from the boys, or the women from the girls, if you'd like. They're doing it in other states this year, too, for the first time. I recently purchased (for $11) a temporary South Carolina fishing license online.

DEC: Come on, shape up your website and get your act together with where the funding is going. Keep it simple. What's the deal?

FYI: I haven't made my purchase just yet, but this page shows the permit I'll be getting, not some other $10 permit which I thought I could get away with.
Posted by Mike at 4:16 PM